​Thanks to the global growth of Capitalism for past two centuries, humanity has made great progress,lifting people from hunger, bondage, poverty and misery.   All done without the need for "fixing" income inequality! 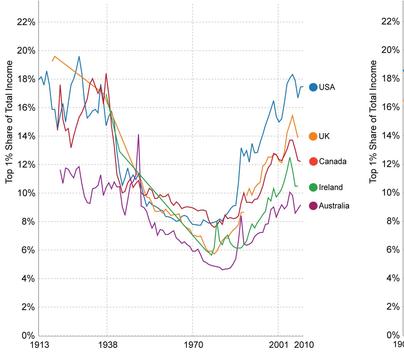 Wealth and Income Inequality  ...What you Need to Know to Argue with Liberals​

​Example of the Wealth/Income Inequality cycle over time:

The Chart reports data for the top 1% on the collapse (and slow restoration) of income inequality through the 20th century in the US, Canada, UK, Ireland and Australia.  Note the loss of wealth and income during the 1930's through the 1960's,when countries began recovery from the "violence" of financial crises, war, and state collapse.  Income inequality already got "fixed" in the last century!

Key Resource for page content is "The Great Leveler" by Walter Scheidel.  For more background, here is a video of interest (50 minutes)

​In the Beginning....wait, let's not go back that far!