​Most importantly, the weaponization of agencies of the government (DOJ, FBI, CIA, NSA) to seek an overthrow of an elected President would never have come to light in a Clinton Administration.  At some point in time, if justice prevails, one or more of the principals in the scheme to destroy the Trump Presidency will be held accountable: 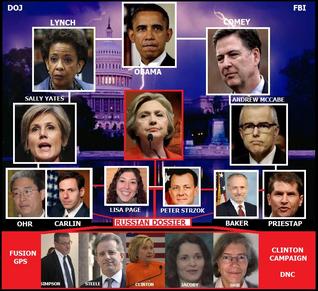 ​​What if Hillary Clinton Won?

The election of 2016 was both historic and consequential.  Our nation was at a crossroads and many of us are grateful that the voters chose a path that offers hope for securing the benefits of our system of freedom and democracy for our children and future Americans.

We are all well-aware of the total failure of polling operations that completely missed the election results.   In hindsight, there was one poll that correlated with the election outcome.     For decades, Rasmussen Reports has polled registered voters monthly, asking: “Is the country headed in the right direction, or wrong direction?”  For seven+ years, the monthly poll results were about 60-65% wrong direction.   In November 2016, Rasmussen  conducted post-election polling to capture information on how people voted versus their view of the direction        of the country.   Rasmussen reported:

Today we have a President with a 45% range approval rating, but one who is acting out his agenda.  But let's speculate about a Clinton presidency.  Consider where we might be if Hillary Clinton won:

​We the people have chosen a path forward that rejects the policies of a Hillary Clinton administration.  President Trump speaks frequently about his commitment to the people who elected him, along with his total commitment to the agenda he promoted throughout his campaign.  Let us continue to support him, especially in his efforts to “drain the swamp” of Federal government.